There are some fiction writers who perceive people as good because God made them to be like Him. I am one of them.

I also recognize free will. We can choose not to be like Him, and even choose not follow Him. But the job of a writer who sees people as coming from God, is to translate His goodness in some concrete form for her readers; and that is a difficult job in our world today because many don’t believe in a Creator, and others don’t see our world as good. So what is such a writer to do?

First, I believe this sort of writer will have strong emotion about current events where goodness is not: The murder of children. Debilitating disease. Sadistic, sexual perversion. Dishonesty. Meanness, and on and on--just check ‘I choose not to follow” on each of The Ten Commandments. The question then becomes, “Can God, our Creator, be found where goodness is not?”

Yes. And He is powerful enough to draw out goodness from atrocities that emanate because of the misuse of human free will.

In this writer’s imagination, there is a link between the divinity of God (the supernatural world) with the natural world. The task becomes that of interlocking the two. Representations are created, and specific truths about God’s presence in our world appear in the writer’s mind. She translates it in her settings, characters, and dilemmas. And what she translates is a tenet called grace, both Sanctifying Grace and Actual Grace. Sanctifying Grace, inherited from the God who made us, lives in the soul and stays in the soul. By contrast, Actual grace doesn’t live in the soul; rather, throughout a lifetime, it acts in the soul as divine pushes from God toward His goodness. But those pushes require cooperation. The translating writer understands that a person must accept grace on his own free will; and grace, like love, is sometimes prickly.

A writer who translates grace in a world on edge, sees a double beginning and ending in everything, and I mean everything, including the awful, current events mentioned above. Along with this, she realizes that knowing ‘reasons why’ is a human characteristic. She perceives a cause, and an effect that creates another cause, and effect, and so on into infinity. Stories are discovered in her imagination and brought to light by a very intimate flashlight, one that shines a light on the many causes and effects of free will, and on the causes and effects of grace; both working, and often conflicting, in the same human soul. 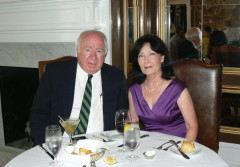 My husband George and I at the Pink House in Savannah, Georgia

My motto: God loves you madly, so let Him.﻿ 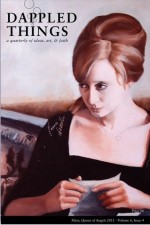 Dappled Things is publisher of Red Bird, a short story by Kaye Park Hinckley. (Mary, Queen of Angels issue, 2011. Another of Hinckley's short stories, Dragon, is included in the Candlemas 21013 issue.

Dappled Things is a literary magazine dedicated to providing a space for emerging writers to engage the literary world from a Catholic perspective. The magazine is committed to quality writing that takes advantage of the religious, theological, philosophical, artistic, cultural, and literary heritage of the Catholic Church in order to inform and enrich contemporary literary culture.﻿

"Kaye Park Hinckley's novel, A Hunger in the Heart, is a story of hope, forgiveness, and redemption. It's a great read in the tradition of southern fiction."

"Kaye Park Hinckley is a writer with a sensitive ear and a keenly developed sympathy for her characters.  Her debut novel, A Hunger in the Heart, marks the beginning of a promising career in the  world of fiction.

Mark Childress, author of Georgia Bottoms and Crazy in Alabama

"In the tradition of Flannery O’Connor, Robert Penn Warren, & Walker Percy, A Hunger in the Heart by Kaye Park Hinckley brings alive the south and the search for meaning and forgiveness."

Hinckley's characters are complicated. They've done horrible things, witnessed horrible things, been the victims of horrible things, yet they continue rising each morning and putting one foot in front of the other. They fulfill their obligations to each other while these horrible things gnaw at them from the inside out. Hinckley deftly presents the repulsiveness of her character's actions, while also revealing her characters' drive toward love. Fully developed plots and well-rounded characters.   --Lake Oconee Living

The short stories in Birds of a Feather are richly imagined tales full of finely drawn characters who demonstrate how people estranged from faith can bumble through life so distracted by worldly horrors and delights, so full of  themselves, that they don't even notice faint nudges of grace that stir in their souls or recognize subtle emanations of the holy that abound in the world around them.--The Catholic World Report